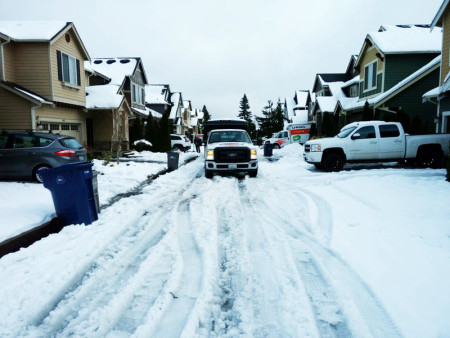 As if the stress of a cross country move isn't enough, you've arranged to have your Harley-Davidson baby picked up at the dealer and then suddenly Snowmageddon hits!

After a long-time customer spent many an hour coordinating with Paul, our Director of Parts and Service about how to get his Harley into the shop before he was due to leave so that it can be properly prepared for pick up from the movers, Mother Nature decided to throw a wrench in his plans!

His home was sold, his cars and belongings were heading south and he was stuck trying to figure out how to get his bike to the Sound Harley shop, so Paul jumped in the truck, hooked up the trailer and went for it!

Paul shares, "We hooked up the trailer and decided to give it a try! Lake Stevens has done well on main roads, but the narrow side roads were not in any condition to ride. With some creative help from a spotter and taking our time backing up, we were able to get it loaded after lots of shoveling from in front of his garage!"

Now he can can focus on the rest of his house and cross country moving adventures knowing his bike is safe and Sound at Sound Harley-Davidson and ready for pick up by the movers!

It may be the last time we see him for awhile, but we make every effort to help where we can!!